You can have children only if you are married and have upgraded the Farmhouse for the second time which adds a nursery and an extra room. After you go to bed for the night, your spouse might ask (1/20 chance) if you want to have/adopt a child. You can answer "yes" or "not now." Same-gender couples will adopt children, and opposite-gender couples will have biological children.

Your spouse will also take your children when they're at least in the toddler stage to events such as the Stardew Valley Fair where they can be found walking around your spouse. There is also a glitch causing them to appear on the same tile and overlap.

If you maintain a 10-heart relationship with your spouse, already have the nursery, and have been married for at least 7 days, there is a ≈5% chance that you will be asked if you want to have a child. If you agree, the baby will be born after 14 days and appear in the crib in the nursery. If you say "not now", there will be a ≈5% chance that your spouse will ask again, each night that you are married (and maintain 10 hearts).

For the first 14 days in the nursery, the baby will stay sleeping. After this, they will begin to stand in the crib (except when sleeping) for another 14 days, but you can play with them. When this stage is passed, they will be allowed out of their crib for another 28 days to crawl around in your house during the day.

Finally, the baby will enter the toddler stage for the rest of their life. They will start sleeping in one of the beds in the nursery, freeing the crib for another child (if you do not already have two children).

The adoption process is very similar to having a child biologically. If you maintain a 10-heart relationship with your spouse, already have the nursery, and have been married for at least 7 days, there is a ≈5% chance that you will be asked if you want to adopt a child.

If you agree, the adoption will occur after 14 days. While you are waiting for your child, your spouse will tell you that the adoption paperwork has been filed.

Your child will appear in the middle of the night, with a note saying that the adoption agency dropped off your new baby.

Interactions with the child will always result in "[child's name] is sleeping.".

When interacting with the child, the player will toss them into the air, which improves the relationship level. You can also toss the child while sleeping for a funny animation.

The child will crawl around the house and play with toys. Sometimes they might be buggy and get stuck in furniture. At night they will be put back into the crib automatically and you cannot interact with them. 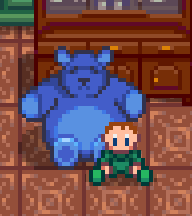 The child will dash around the house. You can right click on them to interact and increase the relationship level.

Children can be dismissed late game by interacting with the Dark Shrine of Selfishness inside the Witch's Hut. By offering the shrine a Prismatic Shard it will allow players to turn children into doves, making them leave the farm forever. Once dismissed, children are gone for good and cannot be returned. Note, however, that this will open up the possibility of your spouse asking if you want to have children again. If a child is wearing a hat when they are dismissed, the hat will show up in the Lost and Found the next morning.

If you are married to a farmhand in co-op mode, the main player will randomly be asked if they want children overnight. If the main-player says yes, the question is asked to the farmhand. Once both players say yes, a child will be born, following the above rules.