The Copper Pan is a tool used to gather ore (and other items) from rivers, lakes, and ponds. You receive one after the Glittering Boulder at the bridge just west (left) of the mine entrance is removed, revealing a waterfall in its place. This task is accomplished by completing the Fish Tank Bundles or purchasing "Panning" from the Joja Community Development Form for

Go to the mountain area any day after the Glittering Boulder is removed. The game plays a cutscene where Willy is pondering the disappearance of the boulder. He points out the shimmering lights in the water that indicate that the stream is carrying ore and minerals out of the mountain. He then gives you his spare Copper Pan from his backpack.

Thereafter, Copper Pans can be purchased from the Fish Shop for 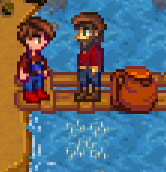