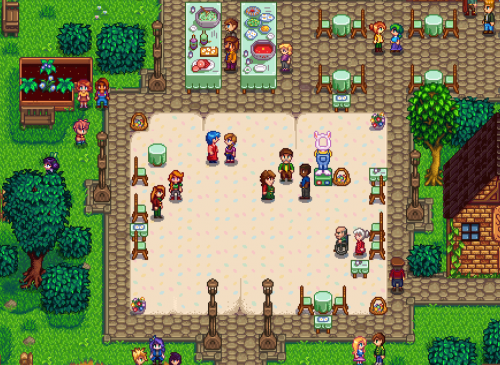 The Egg Festival is the first festival of the year, taking place on the 13th of every Spring in Pelican Town Square. Like other festivals, the event lasts for most of the day and consists of two parts: a social portion and an Egg Hunt activity to finish the day. To take part, enter Pelican Town Square between 9am and 2pm. (It is impossible to enter the town before 9am; attempting to enter will say that the event is still being set up.) The festival will end immediately after the Egg Hunt and return the player to The Farm at 10pm.

Firstly, the villagers will be gathered in the town square and you can socialise with them. There is also a booth set up where you can purchase decorative items and Strawberry Seeds. Planting the seeds by the 16th allows strawberries to be harvested twice before summer. Talking to Mayor Lewis will proceed to the second portion of the event, which in turn leads to the end of the day; it will not be possible to talk to anyone or buy items afterwards, so finish everything first.

Secondly, the featured attraction of the festival is the Egg Hunt. You and some other villagers will have 50 seconds to search for small colored eggs hidden around Pelican Town. The amount of eggs required to win is dependent on the number of players currently in the game. In a solo game (or with only 1 player online in a multiplayer game), you must gather 9 colored eggs, or else Abigail will win. With 2 players, 6 eggs are required to win, 5 eggs with 3 players, or 4 eggs with 4 players.[1] If you win, you will receive a Straw Hat as a reward. If you have already won an Egg Hunt in previous years, you will receive

1,000g. If two or more players in a Multiplayer game win the Egg Hunt, all winning players receive the reward. 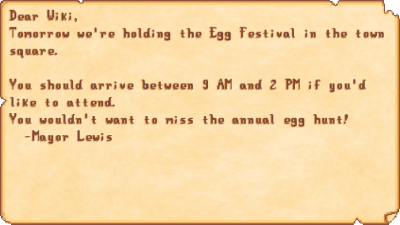 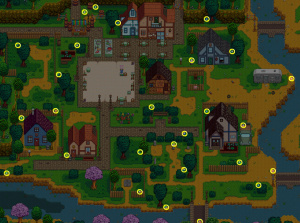