Ginger Island is an island in the Fern Islands archipelago which can be accessed after repairing the boat in the backroom of Willy’s Fish Shop and buying tickets, which in turn is accessed after completing the Community Center.

Ginger Island is the only island available to visit in the archipelago, though other islands can be seen from the boat on the way there.

The player can return to Stardew Valley at any time for free by entering the boat on the southern beach. They will usually arrive back inside the Fish Shop, except on festival days when the path back to the Farm may be blocked, in which case the player will be deposited on the Bus Stop instead. If the beach is inaccessible, on days such as the Dance of the Moonlight Jellies festival, the player will be deposited on the bridge leading to the beach south of Pelican Town.

Similar to the Greenhouse, crops planted on Ginger Island are not affected by the current season, so they can always grow.

The area where the player first lands; contains the dock, a small beach, and a warp location for a Warp Totem: Island or Island Obelisk.

After you have built the island farmhouse, a beach resort can be built for 20 Golden Walnuts. From then on a subset of villagers from Pelican Town will arrive at 11:00 AM and leave at 6:00 PM each non-raining day that isn't a holiday. The player can open/close the resort the next following day with the toggle located between the two doors of the changing room.

After opening the beach resort, Gus will run a bar on the days when he visits.

This area is unlocked by building the Island Beach Resort, which clears the debris east of the dock. It contains a star-shaped tide pool, a large rock offshore, and a hidden pirate's cove.

There is a hidden entrance on right side of Island Southeast that leads to the Pirate Cove. It can be accessed at any time once Island Southeast is available, and on non-rainy and even-numbered days of the month there are visiting pirates after 8pm.

When pirates are visiting, the player can play Darts to win Golden Walnuts. (There are no rewards after the first three games.) There is also a bar where the player will be given Mead once a day if they are wearing a Pirate Hat, Eye Patch, or Deluxe Pirate Hat.

Pirate Cove Fishing The player can enter the cave at any time to fish in the pool to the southeast. It is the only place in the game where Stingrays can be caught.

The mermaid and stones, all of which only appear on rainy days.

On rainy days a Mermaid will appear on the large rock by the shore. If the player places Flute Blocks and tunes them to play the Mermaid's song, she will reward them with 5 Golden Walnuts.

To play the Mermaid's song, place Flute Block on top or below each set of stones on the shore, then tune each block by the amount of stones. A large stone symbolizes 5, and a small stone symbolizes 1. After tuning all 5 blocks, simply run past each one left-to-right.

This area is reached by walking East from the dock on Island South. It contains a jungle, and a hut where a boy named Leo lives with a talking parrot. This parrot will give you hints as to how many Golden Walnuts you have left to find in areas. Outside of the hut is a Banana Shrine.

A hidden path to the East in the jungle leads to an area with a shrine and several pedestals. The entrance is one square south of the parrot express kiosk and all the way to the east. Each pedestal has an image carved in stone in front of it that corresponds to a section of the island. Interacting with the shrine shows the following message:

"When dark clouds cry, begin your quest
To seek the fabled gem-birds four
Each day, one north, south, east, or west
Arrange their gifts upon my door"

Each day that it's raining on the island, a gem-bird will appear in one cardinal direction of the island:

Approaching the bird will cause it to fly away, leaving behind a gem that matches the bird color: aquamarine, topaz, amethyst, emerald, or ruby). (Note: The gems for each area are randomized per game.) The gem should be placed on the pedestal that matches the location where the bird was found. The arrangement of the pictures and pedestals corresponds to the traditional compass rose, with north at the top. When all 4 pedestals have been filled the shrine will activate and give the player 5 Golden Walnuts.

This area includes everything reached by walking north from the docks on Island South. 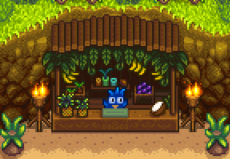 The Island Trader becomes available after the player trades 10 Golden Walnuts with a parrot to unlock the stand. It is run by the Island Trader who is a blue-bird merchant. Similar to a few other merchants, it only barters in exchange for other items and has a rotating stock of island-themed items.

The parrot will not show up until the player has unlocked the island farmhouse.

On the left side is a broken bridge which can be repaired by parrots in exchange for ten Golden Walnuts. Once repaired, it leads to an area similar to the Mountain Quarry. Rocks, Bone Nodes, Clay Nodes, and mahogany tree seeds have a chance of spawning every day.

To the right of the stairs north of the Dig Site is the Ginger Island Mushroom Cave. Initially, there is a boulder blocking the entrance, with someone behind it calling for help. Placing any bomb will remove the large boulder and free Professor Snail, thus also unlocking the Island Field Office. There is a chance of new mushrooms spawning every day in the cave. Unlike the farm's cave, mushrooms grow directly on the ground, so players can benefit from the botanist profession.

On the North Side of the Island resides the Island Field Office Tent, where the player may donate fossils. Until Professor Snail is rescued from the nearby cave, the office remains empty with no interactable elements. After the rescue, you can donate fossils to him and answer the Island Survey on the wall in return for Golden Walnuts.

At the farthest north is a volcano dungeon with ten levels, eight of which are randomly generated similar to the Skull Cavern. The fifth level has a shop, and at the tenth and last level is the Forge, where tools and weapons can be upgraded using Cinder Shards.

In order to access the dungeon, a watering can is required to make a path through the lava. This path does not persist between days and must be remade to cross again. After the player reaches the Forge and unlocks the door needed to exit (left of the Forge, right of the starting area), a parrot will perch near the lava river offering to unlock a permanent bridge in exchange for 5 Golden Walnuts.

The lava river in the starting area can be followed to the left to find a hidden exit. The exit leads to the river north of the dig site, where the player can find 2 Golden Walnuts.

This area includes everything reached by walking west from the docks on Island South. The entrance to this area is initially blocked by a sleeping turtle, which can be woken by giving a nearby parrot 10 Golden Walnuts. This parrot will only appear after the first parrot in Leo's house has received its own Golden Walnut.

The area is divided in two by a river. The Farm, Gourmand Frog, Parrot Express, and Shipwreck are to the right, with the Pond, Birdie's Hut, Green Whack-A-Mole, Qi's Walnut Room, Tiger Slime Grove, and Colored Crystals Puzzle to the left.

There is a large area where crops can be planted. Initially it is covered in logs, stones, and weeds just like the Stardew Valley farm is when the player first arrives. Sprinklers can be placed here and fruit trees can be planted. Crows won't spawn on this farm either, so Scarecrows aren't necessary. Just like with the Greenhouse, crops from any season can be grown on the Ginger Island farm regardless of the season.

After the parrots repair the sleeping hut, a cave appears in the upper right-hand corner of the map. In it is the Gourmand Frog who will reminisce about days when specific crops were growing on the farm and asks you to grow them. Once they're grown, you can return to him and he will award you with Golden Walnuts. 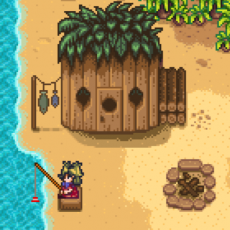 On the west side of the beach there is a shack which is where Birdie lives. Upon meeting her she will give the player the quest "The Pirate's Wife". After the quest is complete, she no longer has any quests, but will speak with you.

There is also a green Duggy moving from hole to hole, which can be "whacked" with the watering can for 1 Golden Walnut. The player can also cover three of the holes with placed objects, and hit the mole with an axe or pickaxe.

On the southeast part of the beach, below the farm area, there is also a shipwreck, which the player can enter to collect a Golden Walnut. It is unclear if this shipwreck is related to Leo, Birdie, or the pirates in the Pirate's Cove.

North of the pond is a small grove. Mahogany trees will grow there, and several Tiger Slimes will spawn. 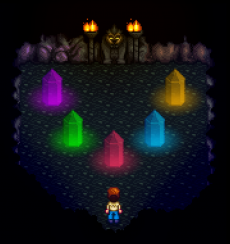 This puzzle is found in a cave northeast of the Tiger Slime Grove.

Upon entering the cave, click on the lion to initiate a game of Simon Says. The game gets faster every round, having 5 rounds in total. Winning the game yields three Golden Walnuts. If any round is failed, the game will restart at round 1. After multiple failed attempts, the game will slow down.

A room accessible by getting a total of 100 Golden Walnuts. Inside is a Perfection Tracker, a Special Order Board, and a Vending Machine that sells items in exchange for Qi Gems.

On the southwest side of the beach there are tide pools where Sea Urchins and Coral can spawn. The southeast features mussel rocks which can be mined for mussels (and 5 hidden Golden Walnuts).

There is a transportation system on the island that can be unlocked by paying the parrots. As more areas of the island are unlocked, they are automatically added to the list of destinations. The locations with parrot travel are: Volcano, Farm, Dig Site, Jungle, and Docks.

When you select a location, an animation is shown of the player walking into a small structure that two parrots then lift with vines. The player then appears in the selected location with no animation.