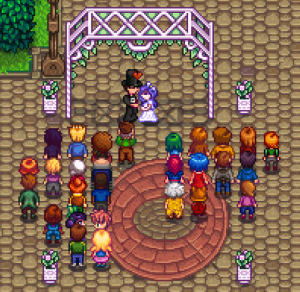 In singleplayer mode, Marriage is possible only with a villager who is marked as "single" in the Social tab. For marriage between players in a Multiplayer game, see Multiplayer and Wedding Ring.

Before proposing marriage, you need to earn 10 hearts of friendship with your intended partner, which requires you to give them a bouquet (at 8 hearts of friendship). You will also need to repair the bridge east of Elliott's cabin (costs 300 wood) and upgrade the farmhouse at least once.

One of the library's Lost Books, entitled "Marriage Guide for Farmers", also explains the process.

Romance can only begin once you have reached 8 hearts with a potential partner (where friendship levels freeze for marriage candidates).

The morning after you first reach 8 hearts with a marriage candidate, Pierre will mail you a message to let you know about the bouquet (

Giving the bouquet unfreezes the friendship level with that bachelor or bachelorette, allowing friendship to advance. Upon accepting the bouquet, their Social tab status also changes to "boyfriend" or "girlfriend". The bouquet can be given to multiple candidates, without regard to gender. There is no friendship penalty for giving bouquets to dating rivals, though there is a Group Heart event that may cause all girl/boyfriends to give you the "cold shoulder" for a week.

The day after reaching 10 friendship hearts with a marriage candidate, you will get a letter from Mayor Lewis:

To become engaged, present a Mermaid's Pendant to your intended partner. You will need to buy it for

5,000g from the Old Mariner. You can find him on rainy days at the tidal pools on the beach (across the bridge you repaired). During Winter, it does not rain, so he will not appear unless you use a Rain Totem. He will not sell the pendant unless your farmhouse has been upgraded and you are at 10 hearts with an eligible villager.

The weather icon is replaced with a heart on the wedding day.

The wedding ceremony takes place in the morning, 3 days after you propose. That is, if you propose on Monday the 1st, the marriage cutscene will take place as soon as you wake up on Thursday the 4th. When the ceremony is completed, you and your spouse appear at the farmhouse at 6am (on the porch, or if you have restarted or reloaded the game day, inside the house). The day then proceeds as it normally does when you are married. Friendship with your spouse can now rise to 14 hearts, but decays by 20 points per day whenever there is no contact between you two.

The wedding ceremony does not take place on a day that another event takes place in the town square. In such cases, the wedding is delayed until there is a day without such an event.

On the day of the wedding, the weather icon that appears between the date and time is replaced with a heart. The weather will also always be sunny on that day regardless of the Weather Report's forecast the day before.

Once a villager has been married, they will move into the farmhouse. They will have a maximum of 14 hearts instead of 10, and keeping them happy will result in them helping around the farm. A happy spouse might make breakfast, feed animals, repair fences or water crops. They occasionally change the wallpaper or flooring of the Farmhouse. Interacting with your spouse when no dialogue is available will result in an embrace.

It is also possible to have children under certain circumstances.

Once married, the gifting limit of twice a week is removed, however the once a day limit still applies.

At 12.5 Hearts (3125 friendship points), there is a random chance to obtain a Stardrop from your spouse, as a token of their love. In multiplayer games where two players marry each other, the Stardrop appears as a present in a small purple box next to each player's bed upon waking up in the morning.

Once married, the player's spouse will immediately set up a unique room inside the Farmhouse, located to the right of the bedroom. Note that Emily's parrot will not be visible to anyone in multiplayer who has not completed her 4 heart event.

In addition to their room inside the house, each spouse has a unique area behind the farmhouse.

Sam does skateboard tricks on a half-pipe. 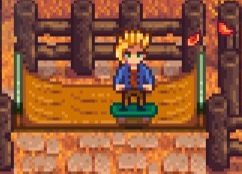 Maru works on a gadget. 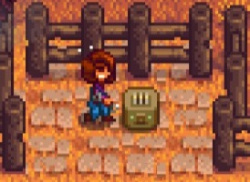 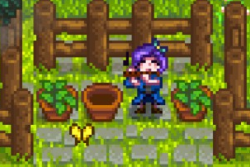 Leah works on a sculpture. 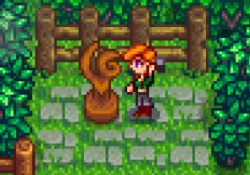 Sebastian works on his bike. 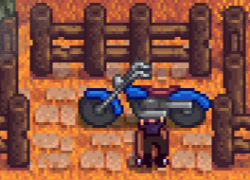 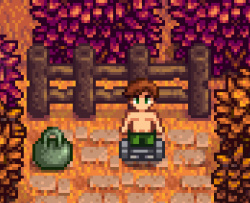 Penny, Harvey, and Elliott will read a book in a potted plant garden. 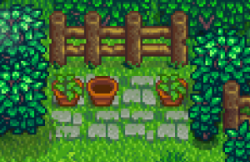 Emily meditates in a crystal garden. 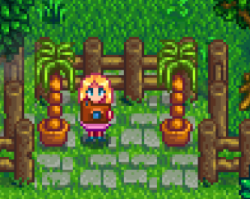 Shane stands by his chicken hutch with his chicken, Charlie, holding him. 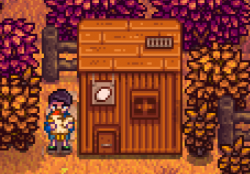 Kissing your spouse will remove exhaustion from your energy bar. This works only with the first kiss of the day, when a heart appears over your heads.

If an object is obstructing the path your spouse takes in the farmhouse, they will say "You could have cleaned up in here a little while I was gone... It's not very nice to have to wade through a bunch of junk after a hard day's work."

If your spouse cannot reach the kitchen, they will say "You've got a bunch of your stuff blocking the kitchen... I guess you're not getting dinner tonight."

If there are monsters inside, such as slime, they will ask "Um... Honey? Why are there monsters in the house?"

If you give a gift to one of the other marriage candidates when you are already married, there is a chance that your spouse will become jealous. This only happens if the villager receiving the gift has already accepted a bouquet from you, and is the same sex as your spouse - i.e., if you married a bachelor, it only happens if you give a gift to another bachelor. It doesn't matter if the gift is liked or not, the only gift that is safe to give is a birthday gift. (Note that delivery quests do not count as gifts.) The chance that your spouse becomes jealous is between 20 and 40%, depending on daily luck. If your spouse becomes jealous, you get a 30 friendship point penalty, and the next time you speak to your spouse they will give an angry message mentioning your gift.[1]

You can have children only if you have upgraded the Farmhouse for the second time, adding the nursery. After you go to bed for the night, your spouse might randomly ask if you want to have/adopt a child. You can answer "yes" or "not now." Same-gender couples will adopt children, and opposite-gender couples will have biological children.

Players can visit the Mayor's Manor where a small book inside will give them the option to divorce their spouse. A divorce costs

50,000g. After filing for divorce, players have the option to cancel before the end of the day (until 10pm when Lewis' house closes). If they don't cancel, their spouse, spouse's room, and unique outside area will be gone the next morning, and their friendship level will return to 0 hearts. Under their name it will state "(ex)".

After the divorce, the spouse will move back to their old residence, and will have negative interactions with the player, citing the failure of their marriage. They will also not accept any gifts from the player. (Note that the player can still enter the ex-spouse's bedroom or home, as if the player had 2 friendship hearts with the ex-spouse.) Any children from the marriage will stay at the farmhouse. Any items the player had placed in the ex's room will be collected and placed in a chest the day after the divorce.

30,000g (this will also wipe Krobus' memory if he is an ex-roommate). Afterward, all ex-spouses will have no memory of the previous marriage, allowing players to date and remarry them if they choose.

If the player is expecting a child and gets a divorce, the child will not be born/delivered.

Divorced spouses neither attend your wedding nor treat you normally during Festivals.