Mayor's Manor is the home of Lewis. It is located east of the graveyard and south of Pam and Penny's trailer, next to the bridge leading to the museum and Blacksmith. Lewis can often be found here either standing at his stove or tending to his garden at the front of the house.

The interior of Lewis' home is simple, with an open concept kitchen that connects to his bedroom. Players must gain two hearts friendship before being able to enter Lewis' room.

50,000g. This book can also be used to evict a housemate (for free). Next to this book is a "Town Ledger" that can be used to change from shared to separate funds (or vice-versa) in a Multiplayer game.

The lost & found box can be used to retrieve items donated to failed special orders, lost quest items and tools, items from offline players, hats from children that have been turned into doves, and items left behind in the Stardew Valley Fair grange display. 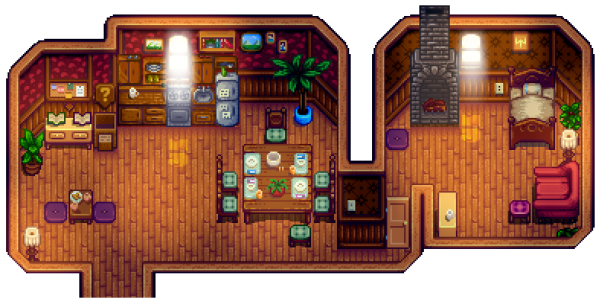