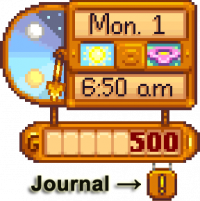 Quests are set objectives that provide rewards when completed. They're kept track of in the quest journal, which can be brought up by clicking the exclamation point icon at the bottom of the date/time display in the upper right of the screen, or by using the hotkey F. Quests are listed in the journal by title, and each quest can be expanded to read the text and requirements for completion. Clicking the X at the top of the window will close it and there's a button under the journal window to cancel the selected quest.

There are two major types of quests, story quests and Help Wanted quests. Story quests are typically received in the mail, but a few are automatically accepted at the beginning of the game to help teach the player about the game. Story quests can be completed at any time after receiving them, there is no time limit or expiration date. 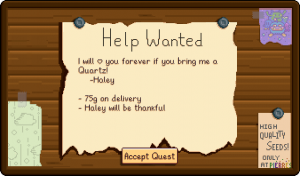 Every day the bulletin board outside Pierre's General Store may have a randomly generated Help Wanted quest that you can complete in exchange for money and sometimes increased friendship with the quest giver. When a new quest is available, the bulletin board will have a yellow exclamation point floating above it. Rewarded money depends on the number of items/monsters involved, the player's skills, and sometimes a bit of randomness. Once you have accepted a Help Wanted quest you will have 2 days to complete it, the current day and the next.

If a daytime festival occurs during the 2-day period, you may be unable to complete the quest on the festival day, since most shops and homes are "locked". See the Shop Schedules page for more information.

There are 2 Achievements associating with completing Help Wanted Quests.

Earning these achievements unlocks unique Hats at the Abandoned House in Cindersap Forest. In addition, the day after earning "Gofer", Mayor Lewis will send

500g in the mail. The day after earning "A Big Help", Mayor Lewis will send

There are 4 types of Help Wanted quests that can be posted. There is no penalty for accepting a quest and then not completing it.

During a cutscene that is available starting on Fall 2, Year 1, regardless of the weather, a special orders board is installed in front of Lewis's house. This board has larger orders that would not be normally found on the Help Wanted board. Unlike Help Wanted requests, these orders are automatically filled without speaking to the the requestor. Additionally, the special orders cannot be cancelled from the individual player quest listing, and time must be allowed to run out. Unless specified, the resources needed for special orders must be collected after the special order has been accepted. On orders that require the player to place items in a container, resources collected before the quest was accepted may be placed in said container, however, new resources must still be obtained. For example, 24 pre-acquired eggs may be placed in the Saloon fridge, but 24 more eggs must still be harvested afterwards to complete the order.

When doing a special order that requires shipping items, the player can ship the remaining items on the final day. The progress bar only tracks items shipped on previous days and this can create the impression that items shipped need to be shipped before the last day, but they do not.

The table below states whether special orders are repeatable after having been successfully completed. All special orders will show up again if attempted and failed.

If the player partially completes a special order but ultimately fails, the donated goods can be picked up in the Lost and Found box in the Mayor's house.

On Ginger Island, after reaching 100 Golden Walnuts, is Mr. Qi's room. Inside, he provides a special order board similar to the one in town, which refreshes with two new quests to choose from every Monday. The player is able to run more than one quest at once.

In addition to quests posted on the "Help Wanted" board, there are several Story Quests unlocked during gameplay. There is no penalty for accepting a Story Quest involving item delivery and then deleting it from your journal without completing it. Story Quests do not count towards the "Gofer" or "A Big Help" Achievements.

Note that the game adds 255 Friendship points for quests that say "1 Friendship heart", rather than exactly 250 points.

Quest Items are items that do not have any use outside of their intended quests, aside from occasional easter eggs.

They cannot be sold. If a quest item is lost, it can be found from the Lost & Found in Mayor Lewis's house.