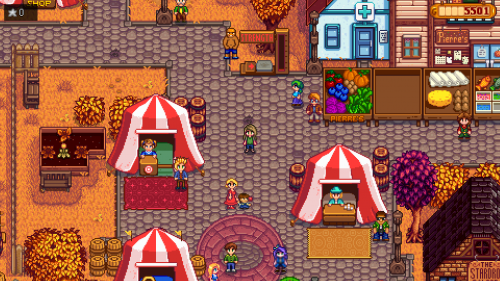 The Stardew Valley Fair is a festival that takes place on Tuesday, the 16th of Fall every year. You attend the fair by entering Pelican Town between 9am and 3pm. When you leave the festival, you will be returned to The Farm at 10pm.

On the day of the Festival, you cannot enter Pelican Town until 9am. Every home and shop outside the town square is "locked" and cannot be entered before or during the festival.

There are several games where you can earn

Star Tokens, a currency that can be exchanged for prizes at the Shop near the entrance to the Bus Stop. The maximum number of tokens that can be held is 9,999.

It is worth noting that you can only purchase one of each item from the shop every year. Therefore, the maximum number of Star Tokens that may be used is 4,900 (2,900 if you have already purchased the Stardrop)Depending on if the store has random stock, and what stock it is. The Shop will be fully stocked again the following year, with the exception of the Stardrop which may only be purchased once.

The Fair also has a Grange Display contest where products of the farm can be shown to gain Star Tokens. Talk to Mayor Lewis when ready to have the products judged. All of your Grange Display items can be picked up after judging, but they will NOT be automatically returned to your inventory. If you do leave the items behind in the Grange Display, you can retrieve them later in the Lost and Found.

North of the fair by the fountains, Gus can be found cooking Survival Burgers, which you can eat to refill your energy bar, but this won't be noticeable until exiting the festival.

The festival ends when you leave Pelican Town.

To participate in the showcase, bring up to nine items to put in the grange display which best showcase the players abilities. The display will be judged on the quality and diversity of the items, and is rewarded with star tokens based on the place achieved. Items can be retrieved after the judging is completed.

Games can still be played at the fair after the grange display is judged.

The points are calculated as follows:

Points based on how many items are submitted, according to the formula: 2x-9 (Where x is the number of items on display).

It is always better to try and fill all nine spots, even if the items submitted are trash, since leaving any spot empty will lessen the overall score.

There are eight categories of items recognized by the Fair: Animal Products, Artisan Goods, Cooking, Fish, Foraging (including Flowers and Tree Saps), Fruits, Minerals, and Vegetables. Each category represented in the display earns 5 points, up to a maximum of 30 points. This means only six of these categories need to be filled to maximize the score.

Below are the items that the Fair will recognize in each category. Any items which do not fall into any of these categories will not earn the additional 5 points, but will earn points based on the sell price and quality, explained in the next section.

A number of points for each item are awarded based on its sell price and quality, with a maximum of 8 points per item. The sell price used in-game is the actual sell price, not the base sell price. For example, a gold-quality item with a base sell price of

200g would earn points for having an actual sell price of

300g AND for being gold quality.

Note: Profession bonuses (which affect in-game sell prices) are not included in the calculations on this page.

Assuming that nine items, each worth 8 points, are submitted and that the items represent at least six unique categories, the highest score obtainable is 125 (14 + 72 + 9 + 30). Getting the maximum score of 125 is only possible if one has access to Deluxe Fertilizer. Out of the eight categories that exist, six contain 8-point items: Animal Products, Artisan Goods, Fish, Foraging, Fruits, and Vegetables. 8 point Vegetable items are only obtainable with Deluxe Fertilizer. Without deluxe fertilizer to grow iridium quality crops, the next best vegetable item is the iridium-quality fiddlehead fern, at 7 points. Because of this, the highest score obtainable without access to Deluxe Fertilizer is 124.

Once the judging is complete, make sure to retrieve the items from the table, as they are not automatically returned. If you do forget to retrieve them though, you can find them later in the Lost and Found in the Mayor's Manor.