The Mines are located in the north area of the Mountains (northeast of the Carpenter's Shop and to the west of the Adventurer's Guild). They are blocked by rock debris until the 5th day of Spring (Year 1), when the player receives a letter.

There are 120 floors total (sometimes called levels) in the Mines. Ore type and quantity increases as the player moves deeper into the Mines. The Mines are filled with rocks and dirt patches. Rocks can be mined with a pickaxe in order to obtain stone, ore and geodes. A hoe can be used on dirt patches to collect minerals, artifacts, ore, clay, and cave carrots.

To advance deeper in the Mines, a ladder must be revealed on each floor. The ladder will sometimes appear when rocks are broken or after an enemy is defeated (killing enemies is the stamina-free option to finding ladders). If a floor is "infested" or "overrun" by monsters, all enemies must be defeated on that floor before a ladder will appear.

If you pass out in the Mines from exhaustion (zero energy), or when 2:00AM arrives, you lose 10% of your gold, up to a maximum of

1,000g. If you pass out from drained health, you lose the same amount of gold and also various inventory items, including weapons and tools (except for the Galaxy Sword). If tools are lost, they are returned in the mail on the following day, though Fishing poles and weapons will not be returned. You will awaken in the mine entrance, found by one of the villagers.

You can recover lost items by contacting Marlon at the Adventurer's Guild. One lost item (or stack of items) can be purchased there, any time after passing out due to low health. The price is the base sell price of the lost item (i.e., the gold that would be obtained from selling one item or stack of items). Marlon's Item Recovery Service persists until the next time the player loses items in the Mines, when previously lost items are replaced by newly lost items.

A Minecart is located on the entry floor for quick travel to and from the mine. It is unlocked by completing the Community Center boiler room bundles or purchased from the Joja Community Development Form.

Choosing "remixed" mine rewards in Advanced Options at the start of the game will result in a random reward for each reward floor from the following list. Some floors and unchanged. All floors have the possibility of having their normal reward.

Ladders can be dropped from Monsters[1], Rocks[2], or spawned on load[3]

Every monster killed has a flat 15% chance of spawning a ladder, assuming the enemy was killed over an unobstructed tile. This does not prevent ladders spawning from rocks.

Some floors are preloaded with a ladder (12, 52, 92, treasure floors in skull caverns). These ladders do not prevent ladders spawning from rocks.

After a floor loads, there is a 95% chance that a ladder will try to spawn. A tile is chosen at random, and if it is unobstructed then a ladder is placed. This will prevent ladders spawning from rocks.

Every rock hit has a base chance of 2% of spawning a ladder. This is adjusted by daily luck, increasing by 2% at best or decreasing by 2% at worst with the Special Charm adding 0.5%. Food buffs add 1% for every point of Luck. The inverse of the number of rocks remaining after the rock is hit is added (e.g if 5 rocks remaining then 1/5 = 0.2 or 20%, if 100 rocks remaining then 1/100 = 0.01 or 1%). If no enemies remain then 4% is added. If this chance hits, then a ladder will spawn, and prevent further ladders spawning from rocks. If you are in the skull caverns there is a 20% chance that a shaft will spawn instead, and this does not prevent further ladders/shafts spawning from rocks.

Containers in the mines may randomly drop loot when destroyed. Containers are equally likely to be crates or barrels; the possible contents are not affected by the type of container. At most one item will be dropped by a container, although multiple copies of that item are possible.

These special items can also be dropped by a small fraction of monsters. About 1.2% of Slimes are identifiable as special Slimes by gold stars. For all other monsters, less than 0.2% of monsters will drop special items instead of standard loot, but these special monsters look identical to the standard versions.

The following table lists the chances of finding items available from dirt patches [6]. It doesn't matter if a hoe or a bomb is used to dig the soil.

Occasionally you will enter an infested floor filled with slimes or a mix of monsters. Unlike normal floors, there are no rocks and in slime-infested floors the walls and ground are covered in green slime rather than the normal themes. Forage-able items such as quartz or mushrooms may still be found though. To proceed from an infested floor, you must continue to fight until all monsters are killed (this includes duggies that may be hidden under dirt patches), at which point a ladder will appear either where the last monster was killed or next to the entrance (the player will be notified with a message saying, "A way down has appeared").

A Staircase can also be used to escape an infested floor.

An infested floor will always be on the same floor for each day and goes up one floor the next day. For example, if an infested floor is found on floor 54 one day, it will be on 53 the next day, 52 the day after that, and so on. On some days, an infested floor might not be found because certain floors are excluded from being infested. These include elevator/treasure floors and the first five, last ten, and nineteenth floor of each section (refer back to the information about sections in Floors). There can be multiple infested floors at once, each are generally around twenty or more floors apart.

The Oil of Garlic Buff prevent floors from being infested. Oil of Garlic must be consumed before entering the floor to prevent infestation.

Repeatedly visiting infested floors can be an excellent way to quickly achieve some of the Monster Eradication Goals at the Adventurer's Guild. 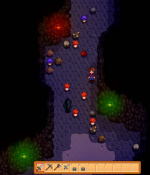 Sometimes a floor in the lower section of the mine (floors 81-119) will have greatly increased spawns of red and purple mushrooms. These floors will also notably have a variety of colored lanterns which usually includes at least one green lantern.

Note that no mushrooms will spawn on an elevator floor (floors ending in 0 or 5) or if the floor is infested (see previous section.) Additionally, the mushroom floor is neither unique nor guaranteed -- there may be multiple active mushroom floors or no such floors at all on a given day, and that situation may persist for several days or weeks. 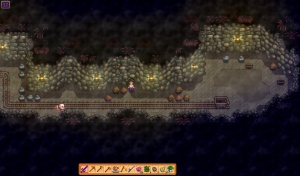 Dungeon floors are similar in appearance to the single floor of the Quarry Mine. They may spawn randomly at any floor of the Mines.

These floors have the same enemies and rocks as the Quarry Mine, which can often be considerably higher level than that of the floors they replace. Players without high-level tools or weapons might benefit from using a Staircase to skip these floor to save time.

The Bottom of the Mines

On floor 120 of the Mines is the Skull Key. The skull key is used to open a door in a cave in The Desert, leading to the Skull Cavern. It is also used to unlock the Junimo Kart arcade machine for play in The Stardrop Saloon.

Furthermore, reaching this floor also changes other parts of the game (introduced in 1.3.27):

The Shrine of Challenge

The Shrine of Challenge is not available until the player unlocks it by entering Qi's Walnut Room on Ginger Island and completing the "Danger In The Deep" quest.

Thereafter, the Shrine of Challenge is located on floor 120 of the Mines. It acts as a toggle switch, alternating the strengths of The Mines enemies between normal levels and "dangerous" levels. The toggle does not change strength levels until the following day.

While the dangerous setting is active, Radioactive Nodes can be found in the Mines, from which Radioactive Ore can be obtained.

If the screen becomes "misty", "glowy", or "foggy", several of the current floor's flying monsters will spawn and attack. Consuming Oil of Garlic will prevent these infestation fogs.

If the player has reached at least Mining skill level 2, floors can be skipped by using a Staircase (crafted from 99 Stone). A Staircase allows instant access to the next floor in the Mines. After every 5 floors, an elevator will be available, allowing access to that floor at any time.

Shown below are foods with buffs that are useful when exploring the Skull Cavern. Note that eating a food with buffs will wipe out any active buffs and replace them with the buffs from the newly eaten food. If the newly eaten food has no buffs, the existing buffs will remain in effect. Coffee, Triple Shot Espresso and Ginger Ale are an exception to this rule; they will stack with other food buffs (but not each other).

Players with access to their saved game files may find the "Stardew Predictor" utility helpful for predicting which mine floors will be infested and which floors will be mushroom floors. The utility is located at https://mouseypounds.github.io/stardew-predictor/.