The Witch's Hut is found in the Witch's Swamp, and becomes accessible after completing the Dark Talisman Quest.

Inside the Witch's Hut are three shrines, the Wizard's missing Magic Ink (on a table in a purple bottle), and a red teleportation rune on the ground. Returning the Magic Ink to the Wizard unlocks five "magic" buildings for The Farm. Stepping on the rune will teleport the player directly to the Wizard's Tower basement room.

Once the player has gained 4 hearts of friendship with the Wizard, the teleportation runes located in the Witch's Hut and Wizard's Tower basement can be used at anytime to teleport between the two locations. Prior to earning 4 hearts, the player will be teleported to the Wizard's basement from the Witch's Hut, but will not be able to return.

The questline to access the Witch's Hut involves two quests, which become available after completing the Community Center Bundles or the Joja Community Development Form. The player can trigger a cut scene at the Railroad, where the Wizard will request they find a Dark Talisman, which can be found in a chest within the Mutant Bug Lair. The Mutant Bug Lair can be accessed by speaking to Krobus, who will reveal the entrance in the Sewers. After obtaining the Talisman, bring it back to the Railroad area and place it on the artifact blocking the cave. Inside the cave is a teleportation rune which leads to the Witch's Swamp. 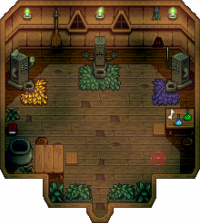 Inside the Witch's Hut