One farm event is randomly selected each night. An event is always selected (except if there's a wedding), but it might have extra requirements that make it do nothing; in that case, it still prevents other events from triggering. The event is chosen in the order listed below.

No event happens on the night before a wedding, or if another event is selected below but does nothing.

An earthquake on the 3rd day of Summer Year 1 unlocks the railroad area.

An event is shown for completing a Community Center or Joja bundle.

Except in winter, there's a 1% chance of the fairy event being chosen. If it's not raining, the event chooses 100 random terrain features; at least one of those must be a crop that's not from Wild Seeds and not fully-grown. If it's raining or no crop was found, the event does nothing.

The crop fairy fully grows all crops in a 5x5 area around the selected crop, so they're ready to harvest. Although the center crop can't be from Wild Seeds, one of the surrounding crops can be; in that case, they'll all produce the same item chosen at random. 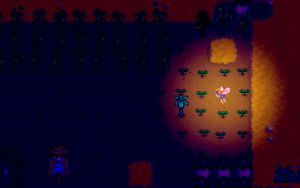 The crop fairy visiting at night.

There's a 1% chance of the witch event being chosen. The event randomly chooses one coop (each with an 80% chance if it's been upgraded at least once, and has fewer than 50 placed objects), or one slime hutch (each with a 50% chance if it contains at least one slime or other NPC, and has no Wicked Statue). If no building is selected, the event does nothing.

The witch flies over the selected building.

In late-game, you can visit the Witch's Hut, but the witch is never present.

There's a 1% chance of the meteor event being chosen. The event chooses a random 3x3 area on the farm and checks if there's a 2x2 area within that contains no water, placed objects that block movement, buildings, resource clumps, or farm animals. If no such 2x2 area is found, the event does nothing.

A unique Meteorite sound effect plays and a meteorite appears the next day on the farm in the selected area. Any crops or paths in that area are destroyed. This can be counter-productive, especially if the crops being grown are of more value than the loot from the meteorite. In the morning, a message is shown saying "An explosion was heard in the night..."

After year one, there's a 0.8% chance of the strange capsule event being chosen. The event only does something if a randomly chosen tile on your farm is clear and allows item placement.

A unique UFO sound effect plays, and a Strange Capsule appears on a random tile of the farm.[1] It turns into a broken Empty Capsule after about three days, which enables a further Easter egg. Once this event has happened once in a save file, it cannot happen again.

There's a 0.5% chance of the stone owl event being chosen. The event checks the same conditions as the strange capsule event, though unlike the Strange Capsule, more than one Stone Owl can spawn in a save file.

An owl sound effect plays, and a unique Stone Owl appears on a random tile of the farm. This owl is unrelated to the Stone Owl sold at the Night Market.

The description reads: "It's not clear where this came from, but it looks very fine."

If no farm event was selected from the above list (regardless of whether the event did something), the game chooses from one of these events instead.

Child is born or delivered

This event is chosen if you agreed to have a child 14 days ago in the spouse asks for a child event. The child appears in the farmhouse crib the next day.

Bug: if another event is selected above, the child is never born or delivered.

Spouse asks for a child

If married to an NPC:

This event has a 5% chance of being chosen if you've been married for at least 7 days, sleeping at home, have at least 10 hearts with your spouse, have the nursery upgrade, aren't already having a child, and have no children or one child at the toddler age.

Your spouse asks if you want to have a child. If you agree, the child is born or delivered after 14 days.

If married to another player:

This event has a 5% chance of being chosen if you're sleeping at an eligible home and aren't already having a child. A home is eligible for children if it's owned by one of the married players, has the nursery upgrade upgrade, and doesn't already have two children.

One player is randomly chosen to propose having children; if both players accept, the child is born or delivered after 14 days.

In either case, you can safely decline without repercussions; the event will be rechecked on later nights with the same conditions. See Marriage, Children, and Multiplayer#Marriage for more info.

There's a 50% chance the farm animal birth is selected. The event randomly chooses one upgraded Barn that isn't full (each with a chance equal to 0.55% * number of animals inside, e.g. 1.65% for three animals), then one random animal in that building. If no building is selected or the animal can't give birth (e.g. it's a baby or you disabled pregnancy for that animal), the event does nothing.

The selected farm animal in the barn gives birth. A message is shown asking you to name them.

This event is guaranteed to be chosen if no other event was, but has a 50% chance of doing nothing. The event randomly chooses one barn or coop whose door is open with some animals outdoors (each with a chance equal to 1 / number of buildings, e.g. 100% if you have one building and 50% for two).

A unique sound of dogs plays, and one animal left outside of the selected building disappears permanently. All other animals show a message indicating "something bad happened last night", but are otherwise unaffected.

Animal info shown after an attack.