Mummies are a type of enemy found in the Skull Cavern.

After being knocked down, they will get back up after 10 seconds unless killed by a bomb while downed. They will tremble slightly right before getting back up. Downed Mummies are temporarily immobilized and cannot be walked through, but do not deal contact damage. In this form, they are immune to all types of damage except for explosions, which will deal 999 fixed damage.

Simply hit them until they fall into a pile of bandages, then use a bomb to kill them. Other explosive items work as well, such as Cherry Bombs and Explosive Ammo. To maximize efficiency, try to lure multiple Mummies into one area, preferably one with dense clusters of rocks, and bomb them all at once.

Alternatively, players can avoid using any explosives to kill Mummies if they upgrade a weapon with the Crusader enhancement.

Wearing a Napalm Ring will not automatically kill Mummies after knocking them down, and the explosions triggered by killing nearby Serpents and Carbon Ghosts are too small to be reliable, so manual bombing is usually required.

Mummies spawn in rooms resembling an Egyptian tomb, which appear randomly throughout the caverns. 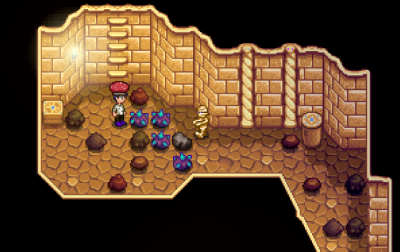 A Mummy pursuing the player.