The Secret Woods is an outdoor area that can be entered from the northwest corner of Cindersap Forest. The entrance is initially blocked by a fallen log that can be cleared after upgrading to at least a Steel Axe.

The Secret Woods contain seasonal forageables and Slimes that will attack the player. Monsters here have a chance of dropping Mahogany Seed when slain.

The Secret Woods also contains six Large Stumps that regrow daily and can be harvested for a total of twelve Hardwood each day. Four stumps are in the upper part of the woods, and two are found by walking through one of two covered passages to a smaller lower area. One passage is through the trees slightly southeast of the upper set of three stumps, and the other is south of the entrance to the woods, approximately 2-3 tiles to the right of a bush. The former passage is a straight line, but the latter requires the player to walk south, then left, then south again.

Old Master Cannoli is a statue in the Secret Woods. When interacted with, it will give the description:

If the statue is given a Sweet Gem Berry, a Stardrop is received in return.

In multiplayer games, only one Sweet Gem Berry is needed for all players to receive a single Stardrop. 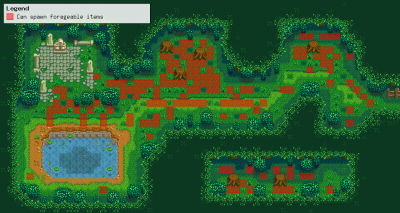 Locations in the Secret Woods where forageable items can spawn.

Forageable items found on the ground in the Secret Woods are:[1]

No Artifacts are possible when digging up Artifact Spots at the Secret Woods. Other possible items are:

Most of the year, there are only 8 tiles (near the pond) where artifact spots are possible, making them very rare, with an average rate of 0.01 per night. In winter the average rate increases to 0.7 per night.[4]

No villagers walk through the Secret Woods, so items can be safely placed in any location. 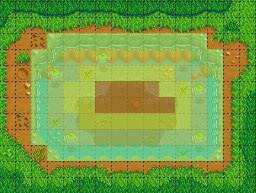 Fishing is possible in the pond in the southwest area. A unique fish, the Woodskip, can only be caught here in most games. (The only exception is if the Forest Farm Map is chosen, in which case Woodskip can also be caught on the Farm). Carp and Catfish are also possible. The available fish are the same year-round, even though Catfish is normally unavailable during summer.

In addition to this, the Wall Basket is a unique item that can be obtained from fishing here.