The Slime Hutch is a farm building purchasable from Robin at the Carpenter's Shop that stores up to 20 Slimes.

After purchasing the Slime Hutch, Marlon will visit the player, providing them with a Slime Egg to start breeding Slimes.

The Slime Hutch contains 4 water troughs which can be filled by the player in order for the Slimes to produce Slime Balls.

Slimes in the hutch will still attempt to hurt the player by jumping at them; obtaining the Slime Charmer Ring will prevent damage and debuffs from the Slimes.

A Random Event can occur whereby a Witch turns all the slimes in a hutch into Black/Transparent Slimes.

Occasionally slimes will drop Slime Eggs. These can be used in the Slime Hutch to hatch into Slimes. There are currently 5 kinds of Slime Eggs which will hatch into their respective slime colors/patterns: green, blue, red, purple, and tiger.

Eggs can also be generated for the hutch by using 100 Slime in a Slime Egg-Press. While the 4 colors can be obtained this way, green eggs have a much greater chance of being produced.

Sometimes, a Female slime might mate with a Male slime (which have the round antenna). If both slimes show a heart, they will create a baby slime (same HP as the parents, half the size). One might have a heart and the other an exclamation mark, which means the latter refused the advances of the former.

One can arrange pathway blockers, such as fences or statues, to isolate the slimes while still being able to collect the Slime Balls. The trapped slimes are still able to reproduce, and hatched slimes will also be in isolation. A copper or steel upgraded Watering Can can fill the water troughs without entering the isolation area (although the copper Watering Can can would only fill 3 of the 4 troughs depicted in the example image below). Slimes do not need to reach the water source, so enclosing them anywhere will do. 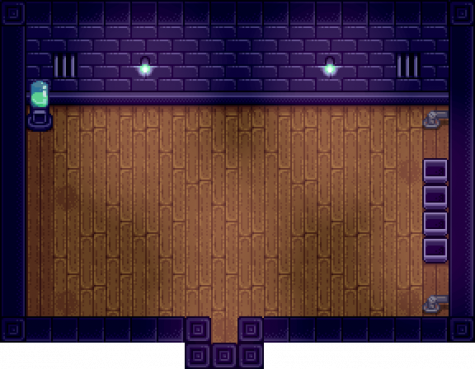